Christmas tradition for homeless is in jeopardy, advocate says 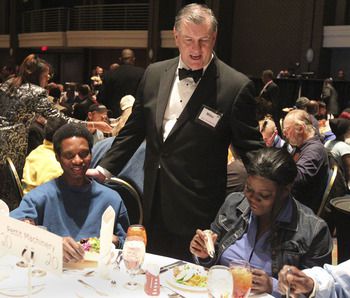 A Christmas tradition for Dallas' homeless apparently is in jeopardy.

David Timothy, also known as The Soupman for his work feeding the homeless, says the Hyatt Regency Dallas has opted not to play host to 500 area homeless next Christmas as it has for at least the past seven years.

Timothy's SoupMobile Inc. has arranged for the homeless to spend Christmas Eve at the Hyatt, dining at a banquet and enjoying live entertainment. In recent years, the Dallas mayor was in attendance to help. (The photo at right is Mayor Mike Rawlings at the most recent event.)

In a press release sent to local media and posted on his website, Timothy says he learned Jan. 24 that the Hyatt is not available for his group.

"They mentioned that they were doing some remodeling and rooms could not be guaranteed," Timothy wrote.

He's asking supporters to help find another top-tier hotel to take his group this December. If you can help, contact Timothy at david@soupmobile.org or call 800-375-5022.

By now you've all heard the bad news. After 7 consecutive years of the SoupMobile taking 500 homeless men, women and children to the downtown Dallas Hyatt Regency Hotel for Christmas, it's all come to an end.

On January 24, 2012, Lon Ricker - Chairman of our Christmas event, and I met with top Hyatt officials to sign the contract for Christmas 2012. To our dismay we were informed that the Hyatt would not be having us back. They mentioned that they were doing some remodeling and rooms could not be guaranteed.

No Room at the Inn.This is a massive blow not for the SoupMobile, but for the 500 precious homeless that count on us each year for a magical Christmas. Essentially we have been told that there is 'No Room at the Inn.' For 500 homeless men, women and children, that means no fabulous gifts, no new clothes, no mega-banquet, and no warm, safe night's stay at the world class Hyatt Regency Hotel at Christmas 2012.

The SoupMobile Christmas event is a one of a kind in the entire nation. And with just a few words from the top Hyatt officials it's all over. 2,000 years ago, there was 'No Room at the Inn' for baby Jesus. Regretfully, 500 hundred of the ones Jesus called the 'least of these' will be facing the same issue in 2012.

SoupMan and homeless child.Now the question is: where do we go from here? We know the door at the Hyatt is firmly closed and will not be reopening. Unfortunately it's not as easy as picking up the phone and calling another hotel and making a reservation. After all we are talking about the logistics of housing and dealing with 500 homeless people and more than 2,000 volunteers. Further complicating matters is that it's not so easy getting a hotel that will allow 500 homeless people inside its doors -- at any price!

Will you help? Can you help the SoupMobile find another World Class Hotel in Dallas that will take in 500 homeless this coming Christmas! Christ was turned away 2,000 years ago. Let's work together to make sure 500 of his precious children are not turned away December 24-25th, 2012. To help, contact the SoupMan in person, by email david@soupmobile.org or by phone 1-800-375-5022.

May the Lord Bless & Keep You All.

David Timothy, a.k.a. The SoupMan