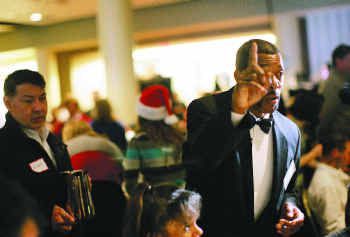 Sporting a sharp black tuxedo, Mack Choice takes meal orders from homeless people at the SoupMobile's fifth annual Christmas Angel Project at the Hyatt Regency Dallas. At the same event a year earlier, Choice was one of the guests.

By dallasnews Administrator
10:19 AM on Dec 25, 2009
How life has changed for Mack Choice.
On Thursday, he was decked out in a tuxedo, his dreadlocks cut, helping serve 500 homeless people at an annual downtown Christmas party.

Last year, he was on the other side, one of the guests. His home was underneath a freeway bridge.
Life changed for the 52-year-old man when he started working last spring for the SoupMobile, a charity that threw Thursday's fifth annual Christmas Angel Project at the Hyatt Regency Dallas at Reunion.
In October, Choice moved from the streets - where he had lived for 15 years - into a home, thanks to the charity. He shares the northwest Dallas townhouse with a roommate, though he still visits his old place under the bridge.
And most recently, he had his missing teeth replaced with bright white dental implants, $60,000 in work donated by a Plano dentist.
"This year has been really outstanding," said Choice, one of hundreds of volunteers at the party. "The love, the blessings, the outpouring of support that has been given to me in the last year is beyond words."
At Thursday's sit-down meal, Choice - once known as the "mayor" of a village of cardboard boxes under Interstate 45 - served as a maitre d'.

He was one of the Fab 50 maitre d's, which included community leaders who paid $1,000 to be among them.
Donor Rusty Kennard, who sponsored Choice's SoupMobile job and housing, paid his $1,000 fee.
Choice took orders for beef and chicken dinners at a table next to Dallas' other mayor.
"We've got the mayor of Boxville and the mayor of Dallas, Tom Leppert, serving side by side," said David Timothy, who runs the SoupMobile.

Leppert, who spoke at the banquet, said the generosity that made Choice's story possible "is what Dallas is all about."
"We want you to have hope," he told the crowd of homeless people. "We want you to be the next Mack."
The Christmas festivities started at 9 a.m., when buses whisked guests from the streets and volunteers greeted them along a red carpet entrance.
They were treated to clothes, gifts, meals and a night at the Hyatt.
Donors pay for the event, which costs $35,000 for the hotel bill alone.
"We feel so privileged that God allows us to do this for people," Timothy said. "It's a pretty hefty fee for this thing, but our donors have really been coming through for us.

"They don't like the idea of thinking, 'I'm at Christmas dinner with my family, and the homeless are under a bridge somewhere.' "
Tears flowed when Choice and Dr. Lee Fitzgerald, the dentist who donated the teeth implants, took the stage during lunch.
All Choice wanted for Christmas was his new teeth so he could smile once again, Lon Ricker, the SoupMobile's director of development, told the crowd.
"Let's take a look and see if Mack got his Christmas wish and can now smile without being embarrassed," Ricker said.
As the ballroom full of people clapped, hooted and hollered, Choice shed a few tears - and gave what must have been the biggest smile he's shown in years.